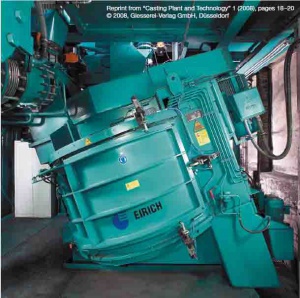 LaserCUSING® technology optimises die casting dies
Improved cooling in temperature sensitive areas of die casting dies can be achieved with the LaserCUSINGR process. The cooperation between an automotive manufacturer and the process developer, Concept Laser

GmbH, has resulted in cooled die cores produced close to contour improving the quality of castings.

By means of a new process management, LaserCUSINGR succeeds in overcoming the traditional shortcomings of the laser sintering technology. Low-distortion and virtually 100% tight components can be generated by using state-of-the-art laser systems, specially developed light exposure strategies, and standard metal powders as outlined by the Key to Steel.

By using original materials, intensively cooled die inserts can be made whose material characteristics are identical with the source material, permitting the use of these components under manufacturing conditions. Concept Laser GmbH in Lichtenfels, Germany, were offered new possibilities of testing their laser technology and making it accessible to the die casting segment through a development cooperation with an automotive manufacturer. The target material, i.e., hot working steel, for the manufacture of the die cores for aluminium pressure die casting was clearly defined. Concept Laser carried out the verification of both development and material qualification throughout the cooperation period.

The new material CL 60 DG is a hot working steel (similar to 1.2709) suitable for the series production of cooled die cores. It has a high basic toughness, tensile strength of up to 1800 N/mm2 and hardness of up to 54 HRC.
From test series to pilot project

Initial trials were carried out for material testing. Various test series served to determine the strain on the specimen resulting from pressure die casting and to draw conclusions on the design of the component.

The test cores were tried out as soon as the initial trials were successfully completed. The cores were generated on a Concept Laser M3 Linear laser melting system. The process is carried out fully automatically, which means that no operating staff is required. Subsequently the cores were finished and set into the gearbox.

The tests were designed to yield information regarding the durability and hot cracking behavior of the test cores.
The test series that are still carried out to date have been extremely convincing:

After more than 100,000 castings, the test core is still in a very good condition.

The test piece does not show any hot cracks; the borehole in the die produced with conventional methods in which the test core is set, however, meanwhile shows major hot cracks 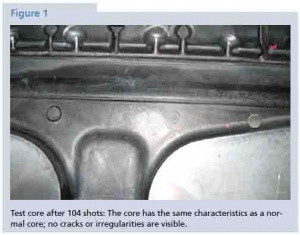 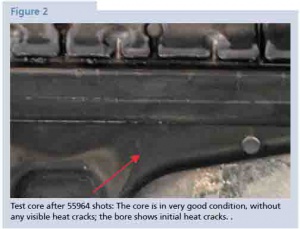 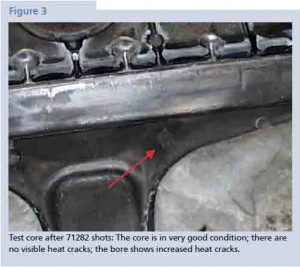 When the test series had proved successful, it was decided to start a pilot project with the aim to develop the new technology to production maturity. The development partners wanted to test the “tempering close to the forming surface contours of a cylinder crankcase in the area of the knock sensor” 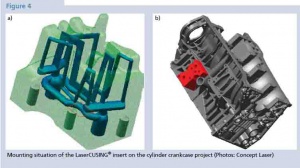 The tool making department decided which serial part was to be equipped with a die insert produced by LaserCUSINGR, and in which areas It suggested the contour in the area of the knock sensor boss in the sliding attachment of the 4-cylinder crankcase. The insert was to be replaceable within the shortest possible time without having to unclamp the die from the machine to avoid major production shutdowns. To prove their applicability, all trials were carried out under serial and production conditions. The purpose was to gain insight on how to optimise the temperature control in the insert and the resulting casting quality. Moreover, the aim was to test the behaviour of the insert, e.g. lifetime and crack formation.

The focus was mainly on

– Insert lifetime and number of shots,

– Casting quality in the area of the knock sensor (oil temperature control or water cooling).

Extensive tests have shown the quality benefits of the new die insert.

The reduced time needed for the spraying of parting agent minimizes the cycle time, because the temperature

difference, ΔT, of the die core is reduced. A lower temperature difference results in reduced thermal stress, reducing the susceptibility to hot cracking by thermal shock.

Using less parting agent increases cleanliness and lowers the costs of spraying. In addition, the disposal costs are reduced, which is also an ecological benefit.

At the request of the foundry, the insert was subjected to separate temperature control and connected to a cycle not connected to the slide. Orings are not needed, and the possibility of leaks is excluded.

The remarkable benefit of a contourclose cooling system is the fact that the contour shape is freely definable,

i.e., there are no limitations whatsoever with regard to manufacturing specifications. For instance, channel

and ejector can be “bypassed” rather conveniently. Conventional machines are only capable of producing straight bores.

Contour-close cooling keeps the differences of temperature within the die low, which reduces tool wear and increases the lifetime of the die. The cooling process of the liquid aluminium which is approx. 700 °C hot is accelerated, which results in reduced shrinkage porosity or blowholes in the casting.

– Premachined contour of the die inserts;

– Programming reduced to a minimum;

The development cooperation with the automotive manufacturer that lasted for a number of years proved that the LaserCUSINGR process is suitable for the serial production of pressure die castings. To provide the basis for continued technological leadership, the automotive manufacturer plans the strategic use of this technology and its application to other fields of production. For some time they have therefore equipped new dies with intensively cooled inserts produced by LaserCUSINGR.